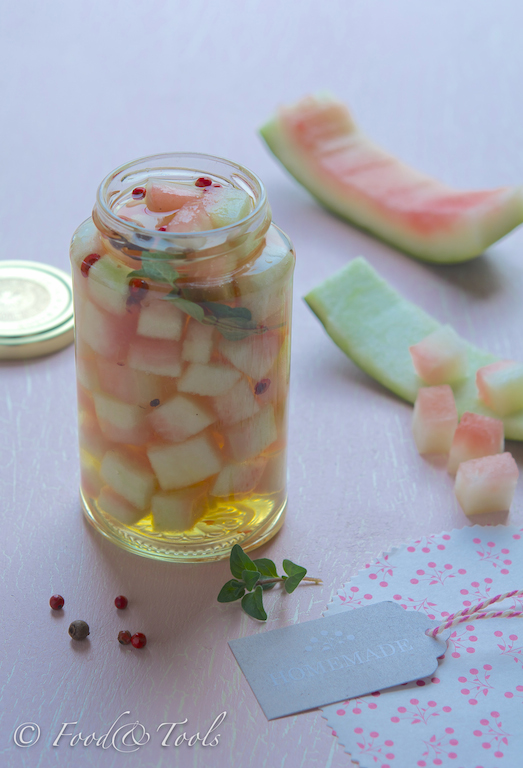 The other day my other half came home with a watermelon and I am sure if it had fallen on anyones foot, it would have required a visit to the hospitals emergency department. We often have watermelon and this time wanted to save and pickle the rind that is usually thrown out. Pickled watermelon rind is not something Iv’e tried before and after seeing a quick recipe in a food magazine, was inspired to make it. After juicing the watermelon flesh, used a sharp knife to removed the green outer skin, but left a blush of colour on the white rind… looks more appealing.

I didn’t make the full recipe (using a 2kg watermelon) as wasn’t sure I would have used that amount of pickled watermelon, also seeing as it’s best consumed within two weeks. Also, wasn’t going to pickle the rind of a 10kg melon either, so this is a scaled down version of the original recipe. Double up if you need more. With the recipe used pink peppercorns instead of black peppercorns and added allspice berries. Always remember to use natural sea salt when pickling, ordinary table salt clouds the liquid. Pack as many cubes as you can of watermelon rind into the jar without squashing the fruit and if you have some pickling liquid left over, chop extra rind and make up a smaller jar.

You can enjoy pickled watermelon one hour after making but I felt it was mouth puckering and as stated, the pickle mellows after a couple of days. So I suggest you let the pickle rest in the fridge for three to four days before using. Taste and you will notice the difference. Glad I had a better pickling experience with watermelon than I had with pickling garlic.

Pickled watermelon rind makes a sweet refreshing gift to take along to summer barbecues or even serve at your own. Or, try add some to these Healthy Shrimp and Kiwi Summer Rolls or mix with cottage cheese and fresh herbs to serve with crackers. Maybe even try adding cooling pickled watermelon rind to a spicy Thai Green Papaya Salad for something a little different. Now I know something delicious to make with watermelon rinds and this recipe might inspire you too. 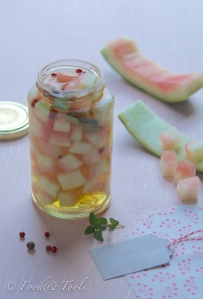 How to make:
Pour the vinegar and water into a small saucepan, add the sugar, peppercorns, allspice, oregano and sea salt. Place saucepan over high heat, bring to the boil, stirring until sugar has dissolved. Remove from heat and set aside to cool.
Pack the watermelon cubes into a suitable clean jar and pour over the cooled pickling liquid (discard the oregano) to cover. Place the lid on top and store in the refrigerator. Leave to mature for about three days before eating. Keeps for about two weeks.