April began with a bee puzzle… two queens on the outside of a hive! I was only aware queen bees leave the hive when swarming to start a new colony. Or, leave as a virgin queen on a mating flight (which happens in the air) before returning to their respective colony. For two days, both queens remained outside the hive, day and night… I checked many times. I googled this scenario, but have yet to find an explanation.

This particular hive had already swarmed and was in the process of requeening, most likely these were virgin queens. Maybe they were sick or injured… the tan queen remained motionless most of the time but I did notice other bees tend the dark queen.

Only realized couldn’t upload a video from my phone on this blog so excuse the blurry photos, these are screenshots of that video. The bees are tugging and pulling the dark queen bee. Maybe they were trying to nudge her out on a mating flight? Pretty amazing to watch.

On the third morning the tan queen was dead on landing board and the dark queen was no longer seen. Early afternoon while observing a flurry of activity outside the same hive, noticed a dark queen (maybe the same one) fly out and leave… an ensuing mating flight was taking place. With so many bees flying around (looks like bees swarming), kept my distance and hoped she would return safely to her colony. Best not to disturb this hive for a few weeks and let new queen settle and start laying, fingers crossed.

April days were warmer and toward the middle of the month noticed bees foraging for water in two big pots with waterlogged soil with grassy plants. They seem to favor this over the chicken water feeder left out for them. Bees need water to cool the hives so it’s good to have a source close by.

According to the beekeeping calendar guidelines for April, check for swarm cells and supersedure cells. Add queen excluder and honey supers. It also advised to check surplus honey. In my case swarming was over and as for surplus honey the bees took some  when they swarmed… honey stores were low. The honey supers were on but so far the bees have not shown any interest.

According to the Arabic lunar calendar April 3rd to 26th signals the last 26 days of spring and is referred to as Al There-a awn (meaning two arms) (phonetically spelt). Summer is around the corner which means, temperatures will soon start to soar.

Towards the end of the month I was delighted to find the new queen… but the surprise was… it was a tan coloured queen bee, not the dark queen like I had expected. Did they choose another one? Were there other queens in the hive? At least she was laying and new baby bees were on the way. But truly…I was left scratching my head. 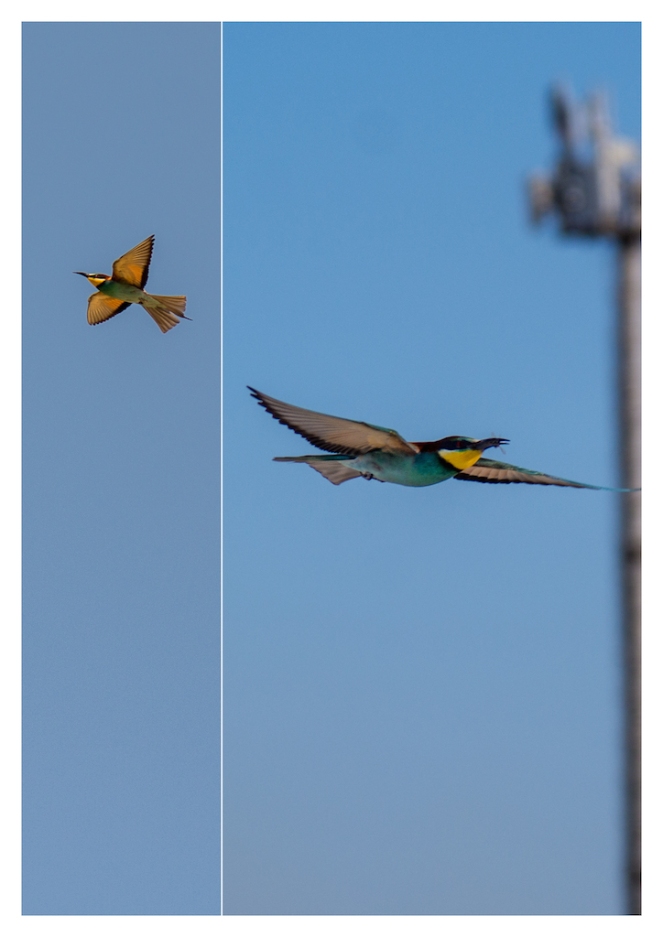 We had a few colorful visitors to our garden, the european bee-eater, these migratory birds pass through Bahrain during April and August. A high-pitched sound alerted me to their presence and this was the first time we had them in our garden. Well, you already know why they choose our area. Beautiful birds, but they love to feed on bees, I’m  sure they managed to grab a few meals of my bees inflight. Managed to get a photo from a distance as they flew around our area. Looks like one of them caught a dragon-fly. The woes of keeping bees.

8 thoughts on “Bees and April”