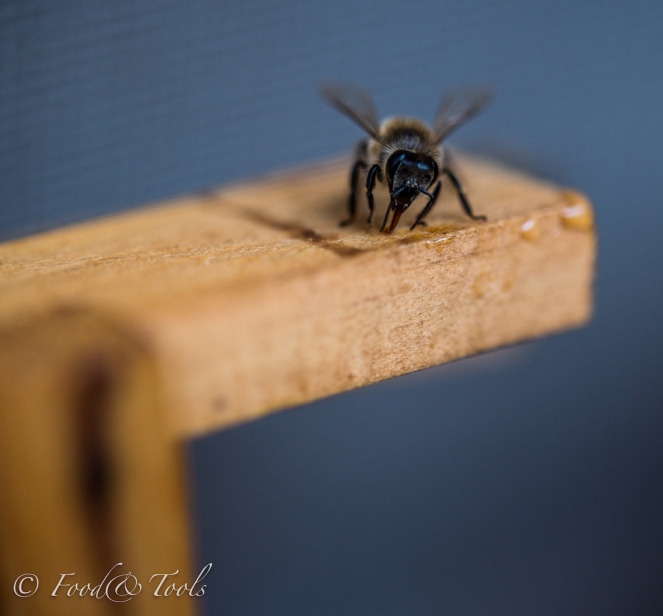 Since my last post on bees I’ve learned that unfortunately I have no control over where my bees forage for food, or when a farmer or home gardener sprays insecticides harmful to bees and other insects.  Last year I lost a hive… literally over night. One minute the hive was thriving and buzzing along nicely and then boom, the hive was lost with only quarter of the bees surviving. A carpet of dead bees on the ground in front of the hive with the same on the inside (photo below) floor of the hive. It happened early morning and I can’t tell you how sad I felt.

On closer inspection looking at the dead bees, many had their proboscis sticking out which indicates it could have been poison. This I’ve seen more often in the last year as foraging bees bring back food or water contaminated with insecticide. But I also noticed lots of other bees with black stripes (I’ve also had a colony of bees, some with black stripes and others with orange stripes) among the dead so this was looking like a colony of outsiders descended on this hive. Was it a displaced colony of bees looking for a new home and a huge battle between the two ensued?  I also inspected the hive and ruled out other possibilities like disease or varroa. 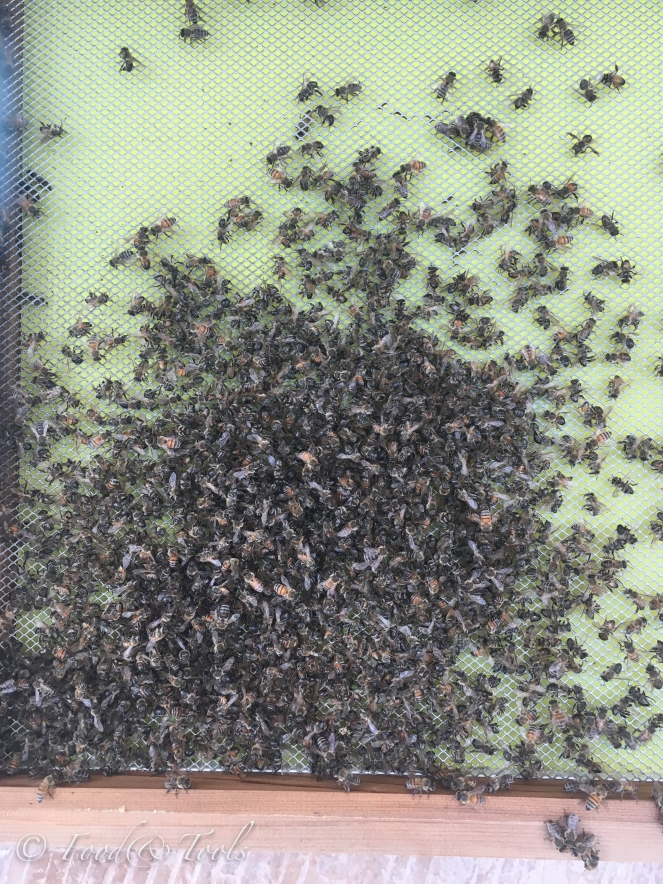 A few days earlier (with the same hive) I had found some collapsed honeycomb from an unwired frame which I mentioned in last years  May/June post, this can happen during  hot weather. I also mentioned the smell of open honey excites bees and can attract other bees from neighboring hives or outsiders to investigate and before long, a mass robbing situation can develop. Maybe this was the case? This was the only photo (one above) taken of that hive with dead bees on the hive floor, I wished I had taken a better photo but photos were the last thing on my mind at the time. Luckily my other hives were unaffected and happily going about their daily business. 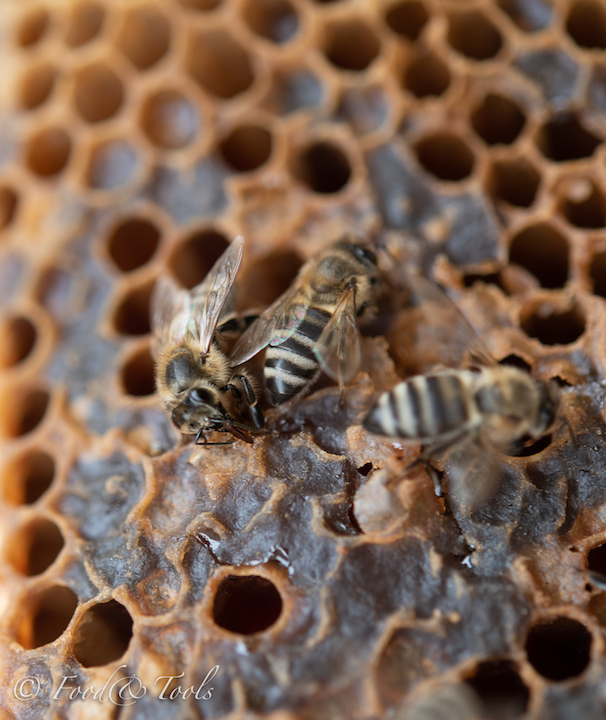 I also couldn’t see any evidence of bees fighting at the entrance, inside the hive or bees flying haphazardly around the hive. Also, the capped honey on the frames showed no evidence that robber bees were stealing the honey. I’ve seen robbing on a small-scale before but this was the first time I had come across this situation and frankly I really wasn’t sure what the truth was… a mass robbing or a colony of bees looking for a new home where neither hive survived the battle. Or, could it have been an insecticide?

Either way it happened in a matter of hours and was over by the time I discovered it at seven in the morning. I couldn’t find the queen bee but remained hopeful she was there and reduced the entrance to the hive, a smaller entrance means the guard bees can protect the hive more easily. Sadly that colony of bees didn’t survive, there was evidence they tried to raise a new queen but it wasn’t to be. 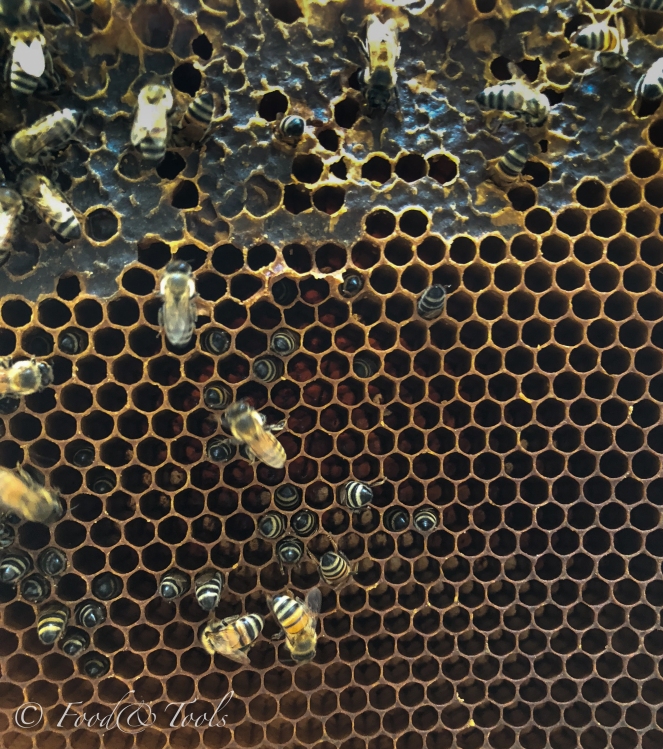 The last two photos are bees robbing a hive. This was another hive that swarmed earlier this year while I was away. My guess was this hive failed to re-queen. It became obvious when robber bees descended on the hive trying to steal what stores they had left. The robbing bees began helping themselves to capped honey while others buried deep into the cells leaving them squeaky clean. I dismantled this hive (something I should have done earlier) which brought the robbing to a complete halt.

According to the Arabic lunar calendar AlMurzam (phonetic spelling) and Jamrat AlGaith (phonetic spelling) signal the peak of summer with hot humid days and nights ahead. July and August are tough months for the bees with scorching summer temperatures combined with high humidity and lack of food to forage on. The bees collect lots of water during this time to help cool the hive. The colony of bees also reduces its size as the queen bee lays fewer eggs and may even take a short break during this time.

The beekeeping calendar guidelines for July and August… harvest honey and make sure the hives are well ventilated. I managed to harvested honey in June, enough to satisfy which is always a plus.

And what about the beekeeper…  although I didn’t mind receiving the odd bee sting ( bee venom is touted as good for you) I had a sudden reaction to a sting last year that was cause for concern. I’m generally careful around bees and mostly wore a half beekeepers suit but now wear a complete beekeepers suit every time I work with bees. You’d be surprised how an upset bee can find the tiniest gap between clothing and skin… I know only too well.

Beekeeping is not all fun and games and can leave you baffled, sore and bewildered at times with lots of unanswered questions, but you still want to keep on going… just like the bees 🙂

Buttery Sweet Date Omelette or…Omeletteh Khorma. Although I have my usual date recipes, had not made an omelette with dates.
Good Morning…coffee first ☕️💛
Dates are this months ingredient pick for the #foodandtoolsuseyourcookbookclub
Recycling with a twist…apart from being used as a broom, Mr Y @ythawadi tells me the older generation in Bahrain may recall the threat of a whipping from an العسو (date palm broom). Hopefully nobody has painful memories! 🧹